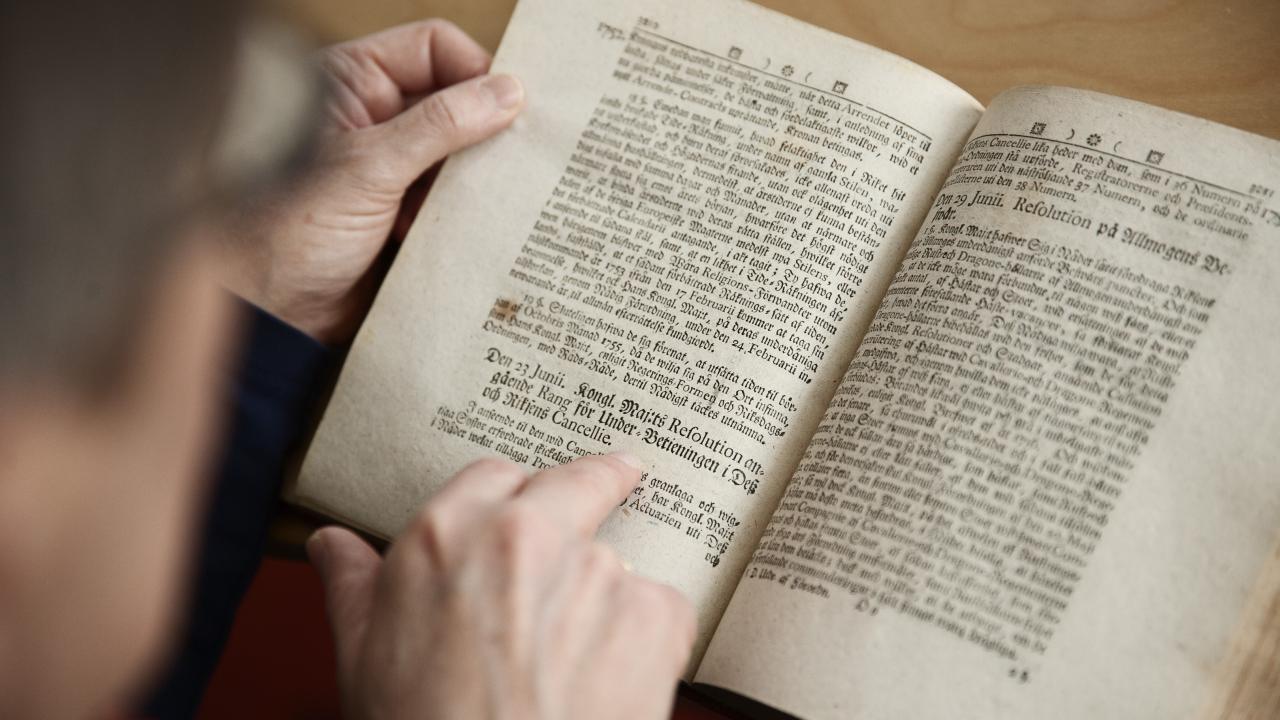 People have always had to work for a living, and this was also true in the 16th, 17th and 18th centuries. But very little has been known about what a farmer or a maid actually did. For the first time a survey is being made of Swedish working life as it was in the days of King Gustav Vasa. The picture that is starting to appear contradicts old ideas about how men and women made a living in days gone by.

Research:
Overlapping social history, legal history and economic history, including issues concerning human subsistence and the view of land ownership during the early modern era, and with a gender perspective.

A research team made up of specialists in history and the humanities is working together to systematically gather information about how people made a living in Sweden from the mid-16th to the late 18th century.

“At that time virtually all work took place in a domestic setting, which makes it harder to gain an idea of what individuals did,” explains Maria Ågren, Professor of History at Uppsala University and instigator of the “Gender and Work” project.

“Nowadays we as individuals travel to our various workplaces, where production takes place. But in former times works was done within a household. Historical sources often suggest that it was the household that got things done, whereas in reality a household was made up of individuals working for a living. For us, the challenge is to try to open the doors to this closed world and find out how individual members of the household actually supported themselves.”

Description of an occupation as a “farmer” does not provide much guidance, nor do the words “maid” or “widow”, found in old records. But other information is available if you know where to look.

“One important source are old court records. They often include specific descriptions of what people did, i.e. everything from selling herring and mending shoes to minding children and dressing wounds. We are gathering all this information and storing it in a specially designed database. We are also saving digitized copies of the handwritten documents from which the researchers have retrieved the information.”

The database being created will be a unique collection of information about working life during the early modern era. The method is called “verb oriented”, and focuses on finding out what people actually did in practice, instead of an approach based on ideals and norms, which might not always reflect the situation in reality.

Even at this early stage, the researchers have found that the old preconceptions of how work was divided between the sexes can be discarded. It transpires that some women devoted their time to typically “masculine” heavy work, and that even though they were not legally competent, wives could sometimes take their husband’s place, and perform duties, sometimes even acting for the state.

Some historians believe that even in the 17th century the man was the breadwinner, while the mother stayed at home, cooked and took care of the children.

“Here, we can see a very different picture. The household of the time was actually more like households are today. Both men and women worked and contributed income in the form of money. Thus, contrary to popular belief, women also worked for money, and made an important contribution to the household purse.”

The research findings also show how Sweden evolved from a society in which people were largely self-sufficient to become part of the modern market economy. Women played a central part in this process.

“Wives in particular played an active role in what we call the ‘emerging market’. They made artifacts and sold them at markets, carrying out what are now known as household services: cleaning, cooking and baking bread in other people’s homes. To understand the expansion of the market as early as the 17th and 18th centuries it is essential to make a thorough study of the work done by women.”

History was not Professor Ågren’s favorite subject in elementary school. She was more drawn to languages. But the more time she spent with her elderly relatives, the more her interest in the past grew, along with an insight into the benefit of historical knowledge.

“They told me about their childhood, and I began to see how individual destinies are intertwined with history writ large. I found it very liberating and beneficial to see the links between micro and macro, between the little guy and the backdrop.”

Professor Ågren could take advantage of this insight during her time studying at Uppsala University. Her doctoral thesis examined land and ownership disputes in central Sweden during 1650– 1850. The past teaches us not only about specific events in the past; it also gives us tools to analyze our own time. She elaborates:

“As a historian one hones the ability to analyze how various factors – political, economic and cultural – interact in highly complex systems. This gives greater understanding of how societies change over time – knowledge that is always needed.”

The “Gender and Work” project was concluded in December 2014, and will result in a number of books, including a monograph in English. The aim is to disseminate the findings of the research worldwide.

The grant awarded to all Wallenberg Scholars is an unusually large sum of money for research in the humanities. It has provided a unique opportunity for an entirely new approach.

“It has enabled us to get our teeth into major and more problematic research issues,” explains Professor Ågren.